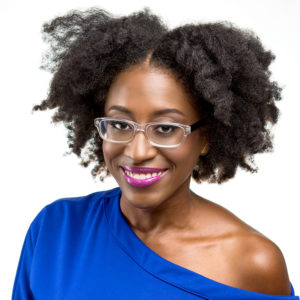 Her insight has been tapped by leading outlets, including The New York Times, The Huffington Post and ThinkProgress. From books to news analysis to breastfeeding primers, she creates dynamic content that amplifies the lived experiences, advocacy and work of people of color and shifts the narrative around who deserves liberation, justice and dignity in America.

Raised in Cleveland, Ohio, Kenrya learned early how White supremacy and its attendant -isms impact the lives of those pushed to the margins, including people of color, women and femmes, folks living with disabilities and members of the LGBTQIA+ community.

She is most drawn to work that centers POC and doesn’t require begging for their humanity, which was the driving force during her tenure as senior editorial director at Colorlines.

As a journalist and editor, her work has appeared in dozens of national publications—including Fast Company, Ebony and Glamour — and has been translated into 21 languages.

She writes about everything from literature to technology, but her heart lies with racial justice, identity and parenting. So it’s fitting that she is the founder and editorial director of parenting blog BlackAndGreenMama.com and is a birth and postpartum doula.

She has provided speeches and lectures, run workshops, and sat on and moderated panels for several organizations at venues including Howard University, American University, Barnard College, George Washington University and the National Press Club.

A 20-year veteran in the editorial space, she has run a successful consultancy—Luminous Prose—for a decade. She is also principal at Perfectly Said Studio, senior advisor at Megaphone Strategies, editor and producer at Gyrate Media, and editor at Bella Books. Kenrya previously served on staff at Reader’s Digest, Latina and Uptown Magazine, and as a contributing editor at ShopSmart.

She has published five books, including How We Fight White Supremacy: A Field Guide to Black Resistance and Anti-Racism: Powerful Voices, Inspiring Ideas. Her next project, to be published by Bold Type Books, explores the role of racism in Black women’s health.

Kenrya earned her undergraduate degree in journalism from Howard University and her master’s degree in publishing from New York University. She currently lives in the Washington, D.C. area with her brilliant artist daughter.

Fighting White Supremacy With a Celebration of Blackness | WNYC | April 2019

How do YOU fight white supremacy? | Colorlines | April 2019

10 Books by Writers of Color That Embrace Self-Love, Resilience and Authenticity | Colorlines | April 2019

A Word: How We Fight White Supremacy Reminds Us That ‘We’ Have the Power | The Root | March 2019